The TAKE FIVE club seems to be working at full blast with an average of ten visitors a week. One month ago we almost broke the record of that particular night when we had a headcount of seventeen people in the room. We had to stand on a chair to handle the situation.

At the beginning of the season we made a big change by introducing the colored envelopes. Instead of obstinately sticking to one topic, we form small groups and each group draws a random topic from the hat. Every topic goes around the room to avoid boredom and embarrassed glances toward the exit. This way we can cover a wide range of interesting issues from the world of dreams through street scams to the iCloud scandal. The organizers arm in arm with British scientists are working day and night to fine-tune this new method until we win the Best English Conversation Club award.

So far we have discussed seven topics from the hat, but we keep adding new ones every week. Remember that you can recommend a topic anytime. You just need to send us a short description with a few thought-provoking questions, and if we find it suitable for a club session, we will drop it into the hat.

Let’s not forget about games either. 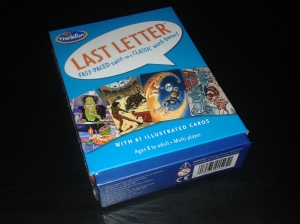 Two sessions ago we played that Activity-like game in which we write words on cards and two teams have to describe them in various ways. Last time we tried to catch murderers by bringing back Alibi. We are proud to announce that the stocks have been refilled, so we bought the Last Letter game, which promises plenty of fun for future club meetings.

You have five chances to visit the club during this season, so don’t hesitate. And finally, a piece of important news: If you would like to take part in a two-day intensive English course and you also have an inexplicable liking for the TAKE FIVE organizers, you have a rare opportunity to kill two birds with one stone. The last weekend of November is the time, but you can read more under Angol kurzus.

Check our Facebook page for the latest event. See you next week!

TAKE FIVE is a place of ambivalence, setting the conflicting aims of raising hard-hitting issues in hopes of inciting heated debates, and at the same time providing an opportunity to chill out at the end of a grueling day playing one of our hilarious games. A bittersweet combination served along with sizzling grilled chicken and steaming tea, just to make the substantial topics easier to swallow.

In the past month our discussions have revolved around crimes, but not ordinary ones – acts that are unlawful from the perspective of jurisdiction, but far not so clear-cut when it comes to common sense.

Imagine the unfortunate case of a 10-year-old who finds a loaded pistol at home, and, having watched a few action movies instead of bedtime reading, he sets off to school armed just to show off. Things, however, go off the rail when he encounters his most hated teacher of all down the corridor, and, for some reason, he decides to put an end to the matter by simply pulling the trigger.

Among the flood of questions there are a few to highlight. What happens to the child? He has commited a premeditated crime, but was he fully aware of the consequences? Should he be admitted to a correctional institution or put behind bars? Is a reformatory enough to “fix” his mind? How can we be sure he would not pull the triger again once released?

We concluded that under no circumstances should children be imprisoned. The only feasible way is higher quality correctional facilities, and what’s even more important, children’s seamless reintegration into society should be ensured in the first place.

“You wouldn’t steal a car. You wouldn’t steal a handbag…” You may remember the short anti-piracy ad before movies on DVDs. Those forty seconds convey the explicit message that stealing a car is no different at all from downloading a movie from the net. This is a logical nonsense in itself. When a car gets stolen, it is no longer there. When a movie is downloaded, however, the source file remains intact – we make a copy.

That’s where the problem of copyrights begin, as it is rather difficult to decide whether an author actually suffers a financial loss in case his work goes viral on the net without its users paying for it. Think of aspiring musicians who use Internet as a diving board into success! Besides discussing personal aspects in groups of two, and clarifying the current related laws in Hungary, we focused more on the above-mentioned approach.

I myself made attempts to challenge every point that supports piracy, but to no avail. It appears that all of the relevant industries somehow benefit from illegal downloads. Many people download a game only to try it out before finally purchasing it. Similarly, if someone falls in love with a song or performer, chances are that he will end up at a concert. Cinemas don’t seem to have run out of viewers either.

When we were arranging for the Copyright Matters discussion, Nóra posted a TED Talk which I promised her to watch. I must admit that this presentation has been one of my most cathartic TED experiences. Once you watch it, you will understand why. (English and Hungarian subtitles are available.)

Special thanks go to Zoli for helping us as a professional to put together the questions and provide background information for the copyright topic.

Having spent the third evening at CD-FŰ, we can say with certainty that TAKE FIVE has finally settled down. The perfect combination of hospitality, fine tea, tasty grilled chicken, and good music will definitely keep us around for good. Not to mention the genuine post-takefive experience, that is, a few beers (or cokes), and a nice chat with those who are not in a rush. But what has been going on within the walls of the club? You deserve a fair account.

Although the little room behind the bar was bursting at the seams, the first meeting was a great success with a light-hearted, yet fitting topic. The future of reading proved to be intriguing enough to last long and incite arguments of some sort. We discussed everything from e-books through education to private publishing. The following two topics, however, did not live up to our expectations.

a perfectly natural moment of our mentally clear fellow organizer

We seemed to find a solution for the problem of homelessness in twenty minutes. None of us supported its criminalization. In return, we came up with the idea that abandoned buildings, of which many can be found in and around the city, could be distributed to homeless people. As for The Olympic Debts, it turned out that only one or two of us actually keep track of the Olympic events, which made it difficult to go into depth with the topic.

It probably won’t be the case with the next week’s topic – Juvenile Crime –, which is undoubtedly of a more general nature. Imagine yourself in the place of a policeman who is fulfilling his duty in an elementary school and catches an eighth grader red-handed with a packet of white powder. What would you do? You have more than a week to think it over.

The famous Story Cubes. The blue “Action” pack is an edition with mostly everyday activities, while the green “Voyage” pack contains drawings for more far-fetched stories (especially when combined with certain recurring visitors).

No matter how the discussions go, they are always crowned with some amusing game. So far we have played Taboo and Story Cubes, but we are planning to bring back old favorites renewed, such as Alibi or that Activity-like game. We are glad to see that every single time at least one newcomer joins the meeting, what is more, they seem to enjoy their time despite the first… few minutes of embarrassment. Nothing is easier than blending with people in a language club like this!

Stay tuned as we are holding surprises for you outside of the scheduled sessions.

Last week we decided to raise a rather sensitive topic to find out how far we can go. Based on a thought-provoking article, we set the goal of discussing all the possible aspects of religion.

“The False Equation: Religion Equals Morality”. However obvious this message might seem, it served as a perfect debate starter. Before diving into the matter, we took a piece of wise advice from Balázs, that is, we should primarily distinguish between faith, religion and the church. We subsequently formed groups of two and started approaching the topic from numerous perspectives. Besides commenting on the article, we collected a bunch of reasonable questions.

The last one was brought in by Enikő. She recommended an article about A. J. Jacobs, a man who decided to live one year of his life according to the Bible. We could even take a look at his book The Year of Living Biblically.

Although the topic was meant to be provocative, the tone of the conversations stayed moderate all along. Everybody seemed to be cautious and respectful.

In the remaining hour we continued to play Alibi.

“Hard-hitting questions and sensitive topics” says the description of HARDTalk, an outstanding BBC program. In hopes of inciting heated debates along with refreshing high-level English speech, we took on that slogan and raised the first fairly controversial issue in the club.

As a response to recent school shootings in the states, a bill has been passed in South Dakota which allows teachers to carry guns in school districts. A long list of questions arose when we passed around the article.

Some of the points people made were:

After all the groups had exhausted the topic, we rearranged the chairs to make it look like a debate show on TV. Two chairs were placed in the center, facing each other. There was only one person who supported the bill with no reservations, so he was chosen to be one of the debaters. Then we drew a name for the “contra” chair. First, we let them discuss the matter without being interrupted. In the end, everybody could address either of the debaters with questions.

It must have been tough to sit in the center of the room being flooded by questions, but I must say that both of them passed the test.

After disassembling the studio, we began to play Alibi.

In case you haven’t heard of the game: Two players are suspected of a crime. They have to leave the room, and make up a story as to where they were together in the time of the crime. Then, the remaining players (as police officers) interrogate both suspects. The second suspect has to stay outside, so that he cannot hear the questions. The point of the game: The two alibis have to match to a high degree. If they don’t, the suspects are arrested.

Fanni and Balázs claimed to be in a pub. They won. Zoli and I were stuck in an elevator between two floors. We could walk away, too. Nóra and Zsófi were arrested. The night at the theater seemed to hold too many contradictions. 😉 This wasn’t the last time we played Alibi.

Feel free to make your comments below. You may also send us your writings regarding the topic or personal accounts on the club meetings, which we will publish under your name.

Welcome to our site!

TAKE FIVE is a conversation club that gives you the opportunity to refresh, practice and improve your English every second week in the heart of Budapest. Spend three hours in the best possible atmosphere, where language development and entertainment are in perfect balance. Don't hesitate to join us!