Last Thursday turned out to be a TAKE FIVE session for the ages. There were many firsts, lots of laughter, and a lot of games. Oh, and a dear, old-time club member got hitched right at the session!

The first shock came even before the session started. It was 17:58 and there was already a bunch of us, eager to start the session. Usually, people tend to arrive a few minutes late, since it’s not always the case that CDFŰ is open before six o’clock. But that was just the beginning, and we were only starting to grasp what the night had in store for us. And, soon enough, as we were going through the usual motions, more and more people arrived – some during the introductory round, some before we handed out the topic, and a few even came during the discussion. We were astounded to count that all in all there were 27 of us! That is easily a record over the last peak in the number of visitors; that happened on the 24th of July, with 22 of us. 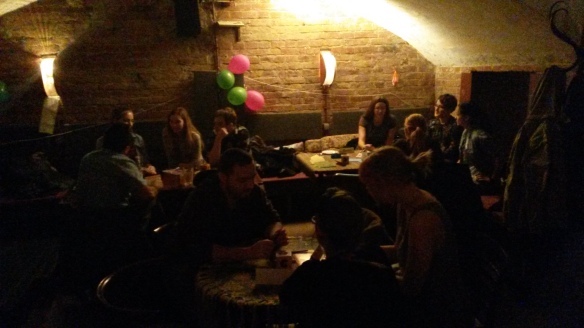 The second great event you may have heard of: we’ve got new topics! With the kind contribution from a few members, and the hard(-ish) work of the organisers, 15 topics are lined up to be discussed by enthusiastic Take Fivers. Last night we drew the first of many (very high-quality) envelopes and had a promising conversation about the topic that lay within: A GLUTEN-FREE TOPIC, PLEASE.

Following this we got to hear about our members’ ideas for strange diets to follow (strange might be an understatement, but there isn’t a word in English for the creatively hilarious surreality that you’re just not sure where to put – clearly a niche in the language), and some disgusting meals were also mentioned. I would like to bring special attention to the team that made us roll with laughter by writing a poem of a fictional menu that truly no-one would or should try.

But now comes the really good part. Because, Ladies and Gentlemen, believe it or not, our longest-visiting club member, a dear friend to us all, the permanent ambassador for the underworld, and soon-to-be destroyer of life as we know it, a.k.a. Zoli got hitched! We actually had a contest: the teams had to present their brides for the dashing young gentleman to choose from, and we are happy to announce that in the end Orsi was found most suitable for this merry joining of evil and love. We wish them a blissful fake marriage, and many macabre moments to look back on! 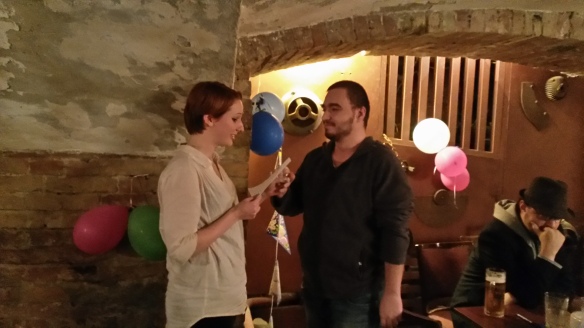 As a finishing touch, really the cherry on top for this already packed evening, we announced the winner of our online game. We are immensely glad to announce that Boró is the lucky one, who next time will enjoy a free club meeting, a cup of non-alcoholic beverage on the TAKE FIVE budget, and she even gets to decide what game we should play! Congratulations to her!

As you can see Dear Reader, there really were great things happening in the club on Thursday. We hope to see you next time, and don’t forget to check out our new topics in the Topic Hat!

Ladies and Gentlemen, the meeting of 23 July bears special significance. We could even go as far as to say that it is a milestone in the history of our club. At 5:45 pm Era, Balázs (wearing a kilt) and I were sitting at a table drinking and eating. Little did we know that in two hours’ time we would be surrounded by a total of 19 visitors. Era was astounded, Balázs was overwhelmed, and I was flabbergasted. (Later on we switched emotions in rotation.)

Whilst the modest crowd of people were discussing the current topic – Plugged In – we kept asking the same question deep down in our souls (and occasionally out loud): is this manageable? After a brief period of breathless deliberation, we came to the following conclusion: yes, it is. And our hearts are filled with joy and excitement. However, our heart rate tends to strike an unhealthy level whenever we remember that our presentation for the freshmen is yet to come…

Over the summer we have been experimenting with new places, but for the fifth session we plan to return to the headquarters. The reason is that the two bars we have tried are too hot and/or too small, while at CD-FŰ the climate is just perfect, and we have the possibility of booking the whole room for at least twenty people.

You will find the event on Monday. Until then, check out the latest photos! 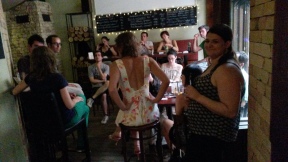 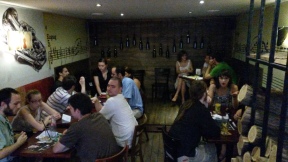 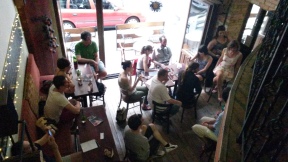 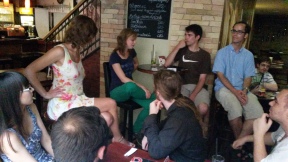 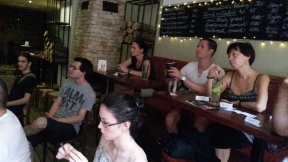 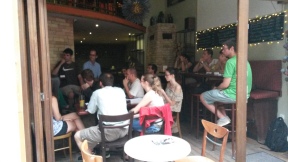 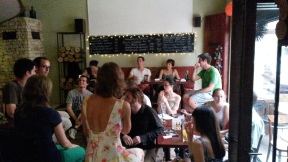 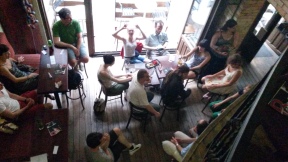 Welcome to our site!

TAKE FIVE is a conversation club that gives you the opportunity to refresh, practice and improve your English every second week in the heart of Budapest. Spend three hours in the best possible atmosphere, where language development and entertainment are in perfect balance. Don't hesitate to join us!