With summer coming up and the TAKE FIVE season ending, it was clearly fate’s intervention that we ran into two of the organizers as they had just finished a class. Luckily, they had some time on their hands before the next one, so we decided to ask them a few questions about the past, present, and future of the club.

INTERVIEWER: So, how did the spring season of 2015 go? Was it any different from the previous seasons?

ZSOMBOR: It was much more than we’d expected. You know, we have a genuine formula that we use every time we gather. There is a more or less thought-provoking or amusing “warm-up question” which is there to get the ball rolling, like If you had a chance to go on a beach holiday with a famous person, who would it be and why? Afterwards, we fan out the tiny envelopes which contain all the topics with short descriptions and debate questions. For this season we introduced a “summary” part, which means that after the small groups have finished discussing the topics (two or three, depending on their popularity), one speaker is elected in each group. They sit down next to each other, give a brief summary of their discussion to the “audience”, and that usually gives rise to short debates. It depends on the topics, of course. The “What is art?” topic led us to tricky grounds…

INTERVIEWER: There is a game near the end of every meeting, is that right?

ZSOMBOR: Oh, yeah, the game. I have a feeling that everyone is looking forward to that from the moment they walk in. There is a selection of games we alternate throughout the season. If I remember correctly, the games we played in the spring were Alibi, Taboo, Last Letter, and a game we simply call “Nóra’s game” as she was the one who recommended it years ago. It always seems to work because it relies on the guests’ creativity. They all have to come up with a few words which, then, all go into a hat. And… I’m not gonna tell you more. Join us next time and see for yourself! (laughs) Oh, and I played two rounds of chess with Antal, but that’s another story. I hope I’ll have a chance in the summer to make up for that last time.

INTERVIEWER: The readers may also be interested in how the TAKE FIVE club has come to be what it is today.

ZSOMBOR: That’s quite an uninteresting story. I was walking around on Margaret Island in the summer of 2011, and I came across a sign on a post that read “conversation club”. They offered four languages. I became interested right away. For some reason, however, I couldn’t attend the weekly sessions, but as I kept thinking about it, something struck me. I posed myself the question: If you are studying to be a teacher and you already give lessons, why don’t you found your own club? I chewed on it for a while and then decided to give it a shot. Nothing to lose, I thought.

INTERVIEWER: Watching these old photos, the club looked very different. Is it just the photos?

ZSOMBOR: No, it was indeed very different. First, we started out in an empty room of an art gallery in the 5th district. The topics weren’t well organized, to say the least. Sometimes we just picked a slip of paper with “old music vs. modern music” on it, and tried to discuss it. It didn’t really work out. The topics seemed like those sloppy oral tasks from your language exam book. Although the special TAKE FIVE atmosphere came to life in the very first year, it wasn’t quite enough. I decided to raise the stakes, so to speak. I assembled a group of three organizers, including myself, and we began to work hard. We beefed up our Facebook page, created an independent website, and spent a great deal of time collecting topics. This was in 2013, I guess.

INTERVIEWER: Balázs, where do you come into the picture? Were you part of that first organizer group?

BALÁZS: No, I wasn’t part of the organizers at first. I believe I started attending the club in … now let’s see, I’m always in trouble when I’m asked this because I honestly don’t remember (laughs). I think I first attended in the spring season of 2013. I was good friends with Fanni by then, and she suggested I check out the club. Needless to say, it was love at first sight, and I don’t recall that I missed many occasions. I was a regular club member at first, and then in (turns to Zsombor), yeah in the beginning of 2014 I became an organizer. Zsombor hasn’t turned me out yet (laughs), so I suppose I’ll stay on board.

INTERVIEWER: Although all of you were insistent on going on holiday, rumor has it that you have planted the seeds for a summer season. Would you mind telling us a few words about that?

BALÁZS: Yeah, we’re glad you asked. We are proud to say that the rumors are true, and special TAKE FIVE summer sessions will, most likely, be held. It seems that enough people are interested, which is always lovely to see. There will be a few changes, though. First of all, these sessions will be primarily run by me, as I can’t expect the others to take on this responsibility in the summer.

INTERVIEWER: And what about the structure of the club meetings?

BALÁZS: No major changes there. The warm-up question stays, followed by discussion in small groups, and then the game. The only thing that’s different is that we’re going to give the guests a bit more freedom in the choice of topics. They may bring articles that they find interesting, or just an idea, as long as they prepare a few thought-provoking questions as well. Or, occasionally, there won’t be any topics, but they will have to come up with something together, like a sales pitch for whacky summertime inventions. We actually tried this game once this season, and it’s a lot of fun.

ZSOMBOR (laughs): What was your crazy idea? A concrete inflatable mattress?

BALÁZS: No, mine was the palinka-based suntan lotion! 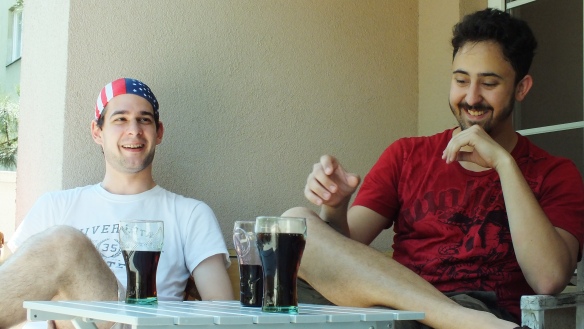 INTERVIEWER: It sounds like a hilarious game! Also, it must require quite a high level of language proficiency. What is the minimum level that you recommend for the visitors?

BALÁZS: We have guests ranging from A2 level [elementary language level] to C2, and I’ve never seen anyone snicker at another’s mistake or incorrect word use. Instead, they listen and nod encouragingly, which is fantastic to see. The most important thing for us is that the general TAKE FIVE spirit is maintained; a fun, inclusive group of people, where you only need to speak as much as you want to, and you don’t have to be afraid of people ridiculing you for your language skills.

INTERVIEWER: And what about the venue? I understand that lately you have been in a teahouse/pub, which is underground.

BALÁZS: Yeah, it’s a great place, but since it’s going to be summer, we will look for something outdoors. We haven’t actually decided on a place, but it will be all in the first event, we will keep everyone informed. So don’t forget to check our Facebook page!