I am strolling down memory lane – taking it slow because there are too many places to stop at. In 2011, we started out in a room overflowing with all the five people and a few packets of salty sticks. We had absolutely no idea how it was going to be. Today we host meetings with fifteen to twenty guests in a nice bar where the backmost room is reserved for us. After months and years of painful struggle, the club began to live a life of its own. Besides the loyal hard core, it has been a true honor to welcome an enormous group of newcomers recently. One of my favorite stories is a guy who told us that he had taken a flyer half a year before so that he could visit us one day. And there he was.

After long weeks of silence, allow me to give you an overview of how we spent our final session in 2016, and also share a few secrets with you about the covert affairs of the club. 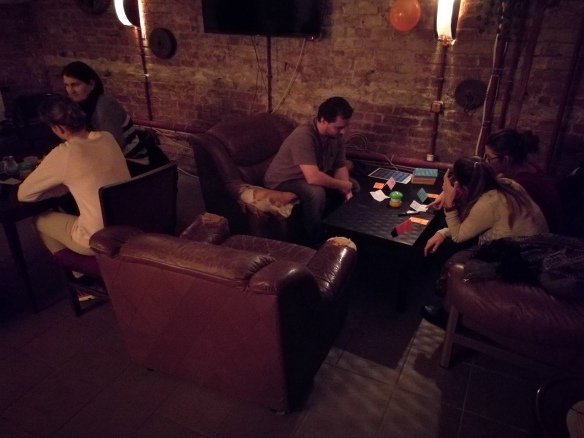 On December 15th we brought back the genuine TAKE FIVE Christmas spirit, like we always do. We began with a few rounds of word chain to get the Christmas bulb rolling. Instead of the regular envelopes, we pulled off a prank on the unsuspecting guests. I stood up and said: “We are having a little technical problem because we forgot to bring the envelopes, but…” We had hidden a tiny slip of paper under the top of each mushroom on the tables. They found out the secret quite quickly. On the slips there was a list of questions related to how we celebrate or what we think about Christmas.

There were no speakers on the stage this time since we did not intend to spark any debate on the topic. Instead, Balázs asked questions like “What is the worst present you’ve ever received?” or “What was your most awkward Christmas moment?” It was incredibly amusing. I finally had a chance to share a couple of childhood traumas, including a disgusting Santa Claus toy that started playing some dreadful music when you approached it. The bullies in elementary school were nowhere near the experience – although as far as the Santa toy is concerned, we were able to lock it up in the chamber, as opposed to the former.

One of the best shots turned out to be our fairly new invention, the Alternative Universes, combined with the Christmas theme. As Woody Allen would say, “I am flabbergasted” by the level of creativity and ingenuity of our guests. Did you know that in the Animal Universe, animals eat roasted politicians on Christmas Eve? The pinnacle of this game was a Jingle Bells song with alternative lyrics sung by the citizens of the Superhero Universe. Sing along:

The main attraction of the night was the all-time favorite, the ever-green classic (labels we arbitrarily stigmatized the game with): the Christmas Taboo, which means forty-eight Taboo cards that we created ourselves. The cards contain words that are connected to Christmas or winter in general. We never play this game with teams. We just sit around the table as one big group, and it’s free for all. As the ultimate motivating factor, we promised a handful of szaloncukor for the winner – which we later regretted. (Contrary to popular belief, there is no proper translation for szaloncukor as it is a Hungarikum solely produced in Hungary and Slovakia.)

After Orsi had won the game by a landslide, she presented us with an offer. She would give away all her candies if we poured the entire content of the two bags onto her. It would have been hard to resist. Here’s the evidence:

What you didn’t know about…

You may still remember that our club once organized an extraordinary session for a group of high school students. We decided to revisit this brand new tradition at the beginning of December. I had an opportunity to meet a lovely group of eighth graders during my first teaching practice in the fall semester. I truly enjoyed all the time we spent together, and I felt by the end that I was not yet ready to let them go. I went back one day and invited them to a special TAKE FIVE meeting organized exclusively for them. They looked a bit puzzled first, needless to say, but on the 7th of December – the first Wednesday in the history of our club – ten of my students showed up (and went straight into the darts room).

The story did not end there. On the 15th, two guys came back to see a regular meeting of ours. They said they would join us for future sessions as well, and that they would try to drag some more classmates along. I am looking forward to seeing them, for a number of reasons.

The show must go on

The club is scheduled to reopen its gates on February 2nd. Our plan is to keep the well-known and well-working TAKE FIVE atmosphere with a format very similar to what you have seen before. My only proposal at this point is to make it slightly more flexible, and maybe broaden our horizons by experimenting with new things. You are welcome to assist us along the way. Feel free to send us feedback on any aspects the club, new activities to try out, not to mention topic recommendations.

Keep an eye out for the first Facebook event of February.