The summer season is in full swing: last night we welcomed 13 lovely people in the backmost room of CDFŰ. Although we promised to bring you all up above the surface for the summer to catch some sunlight, we have encountered unforeseen difficulties, which eventually drew us back to our headquarters for at least two occasions.

Yesterday’s session revolved around the themes of summertime and festivals. We discussed how we prefer to spend our summer, and during the game section we even came up with crazy, or, as we call it, ‘wacky’ festival program ideas before we concluded the night with a game of Scattergories. If you have no plans for August yet, here’s our exhaustive list of offers:

About a year ago we felt that our format needed a few adjustments to make newcomers or shier guests feel more comfortable. We extended our introductory section with ice-breaker bits that are always done in pairs, allowing everybody to take it slow instead of being thrown in at the deep end. We also spiced up the section in which we used to pick one random topic for the night. We now offer three alternatives, but the attendees have to vote on enigmatic, two-word titles, without knowing exactly what the topics are about. The organizers max out their cheekiness by altering the two-word titles now and then to make unpopular topics seem more appealing.

Last night’s voting turned into a comedy show again when the title “repair services” received only one vote. Interestingly, “plastic bags” was not too popular either, even though it has been quite a hot issue recently. The winner was “chat carriages”:

“UK public transport companies decided to help their passengers connect during a one-day experiment. They introduced “chat carriages” where people could find conversation starter cards to try and get strangers to talk with each other while they were travelling.” 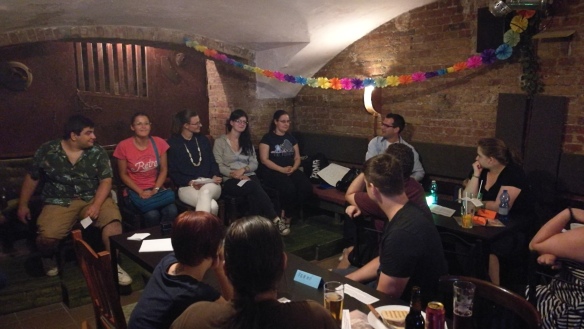 “We’re gonna go on a fifteen minutes break, but before that…” This is the point when we make our announcements for the rest of the day or the near future. This time we had quite a few things to share with the audience. First off, we awarded two more people with the Recurring Member Badge. One of the recipients was sixteen-year-old Anna, who, in the fall of 2018, quite swiftly became the highlight of our club with her fiery teenage presence and astonishingly sophisticated sense of humor.

Besides introducing the badge system, we will be facing another major change as of September: after eight years, the participation fee will be raised to 500 HUF, and it will no longer be optional. To favor our loyal attendees, there will be a premium membership plan, too, with a list of enticing privileges. Stay tuned until the end of this season for more information.

The upcoming session (July 25th) is going to be extraordinary. Two of the organizers will be teaching at an English course which overlaps with the TAKE FIVE meeting, so we have decided to do a crossover and bring the students along next time.